The longest Christmas season in the planet is in Puerto Rico. The kick-off in the smallest of the Greater Antilles is on Thanksgiving and the festivities do not end before January 14, eight days after the Epiphany with what is called “Octavitas”.

The Christmas celebration in Puerto Rico is a mixture of Anglo-Saxon, Spanish and African traditions. The most significant influence of the United States is perhaps the scent of pine that fills the whole country; decorated Christmas trees, typical of countries with cold climate, are present in every home of the tropical island.

The expected arrival of the Nordic Santa Claus (pronounced in good Puerto Rican “Santaclóh”) has somewhat overshadowed the most characteristic Puerto Rican Christmas celebration, but many children are still waiting patiently on January 5 to receive their gifts from the hands of the Wise Men. It means that the Day of Three Kings is a tradition of more identity for Puerto Ricans and even it comes from Spanish Christmas, it has unique characteristics.

The first of these peculiarities is the Three Kings go on horseback, instead of on camels like in the rest of the world. It is precisely for these horses that children put small boxes full of grass under their beds.

The second peculiarity is in Borinquén “Their Majesties” are considered as saints by the people. Because they belong to the lives of the saints are born the “Promises of Kings”, religious and festive rituals in which the devotees ask for favors to the Wise Men which, once paid, are fulfilled thanks to a promise. During this liturgy, which has much to do with Santeria’s offerings of African origin, candles are lit, people pray and sing for the Kings in front of an altar.

The third peculiarity is the name of two of the Kings is different with regard to Europe. In Puerto Rico like in Cuba, Melchior is brown, not Gaspar, and King Baltasar is represented as the old man with white hair and beard.

The island of lights in the longest Christmas

The festival or parade of Kings is celebrated in several towns on the island, however, Juana Diaz is the place where the tradition is more rooted. In this southern village took place the first celebration in 1884 and since then, every January 6, men, women and children group together in the streets of the village to attend the feast of Epiphany and the parade of Kings will be the starting point of a journey towards other villages of the island to bring the Good News of the birth of Christ. This town even has a museum dedicated to the Three Kings. The Three Wise Men are not only considered as Christmas symbols, but also as a symbol of a very popular cultural resistance for the rest of the year, that is a reason for making works of art or precious artisanal carvings of saints.

Christmas lights are another distinguishing sign of Puerto Rican Christmas, after Thanksgiving and during the first week of December, the municipalities celebrate their traditional “Christmas Lights”, an event in which are lit lights that will adorn trees, streets and squares. Puerto Rico is characterized by doing things big hence the undue amount of bulbs and strings of fairy light that give the whole country a blinding print. Usually the illuminations (encendidos) take place in the main squares of cities and towns and are accompanied by cultural and family activities, traditional music concerts and even in some cases fireworks. In addition, light ornaments illuminate not only the public spaces but also private houses and shopping centers (they also make their Christmas lights). 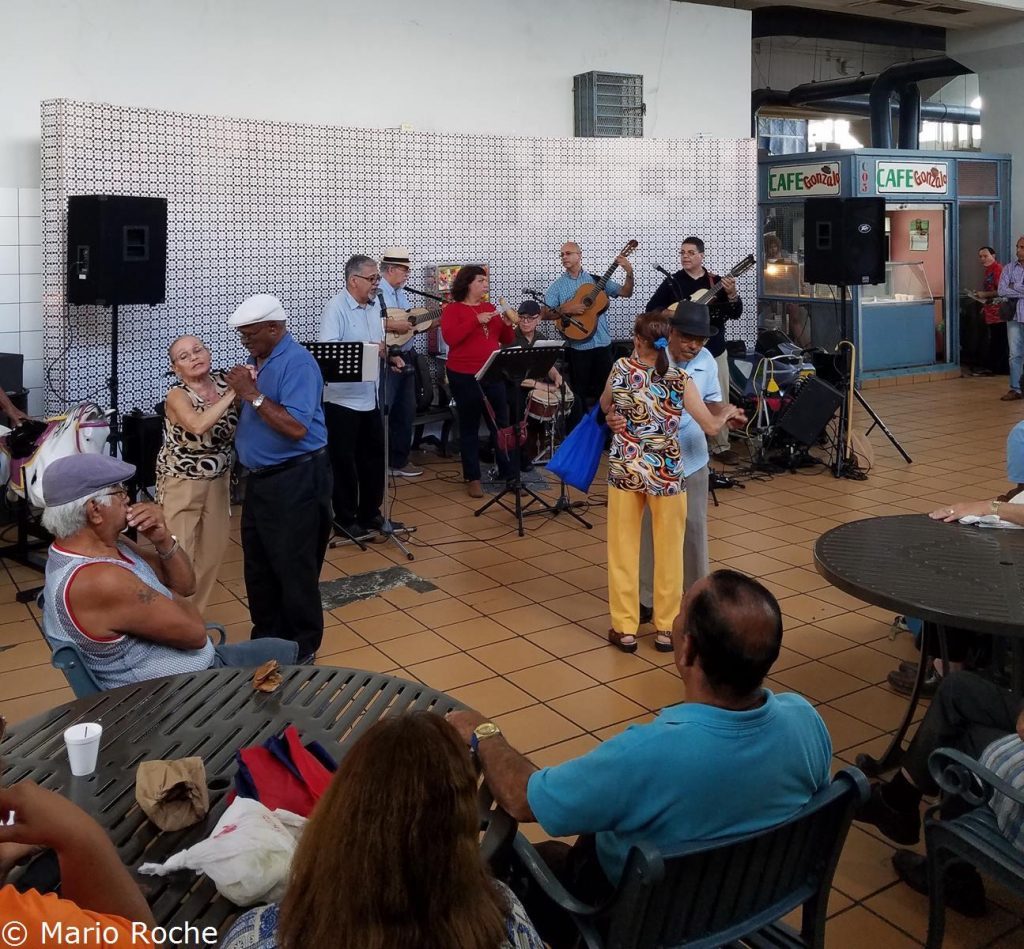 The Land of Music

But Christmas means above all music, Puerto Rico Traditional Christmas Music. Every religious feast, celebration or ritual worth in salt must have musicians or fans who play guitar, cuatro, güiro or maracas. During those days the traditional handicraft bazaars take over the city and it is frequent to meet groups of typical music in squares and markets.

Nine days before Christmas Eve, take place the “Aguinaldo Masses” (Masses of Christmas bonus) where the Catholic parishioners go around five o’clock in the morning to begin a novena which ends with the famous Midnight Mass, which is celebrated on December 24 and announces the birth of the Child Jesus.

Another Christmas customs among the funniest are the famous parties (parrandas) which, even they decreased a lot because of criminality, start in early December. The “parrandas” also called “assaults” consist in the fact of a group of musicians armed with instruments arrive at the homes of friends, relatives or neighbors in the early hours of the morning and surprise them by shouting “Assault!”, by singing until they wake up and they eventually open the door. Once inside the house, they keep singing and playing their music until dawn. “Parrandas” were frequent in the rural areas and “parranderos” after bringing music and carols were and still are rewarded with typical dishes and drinks. 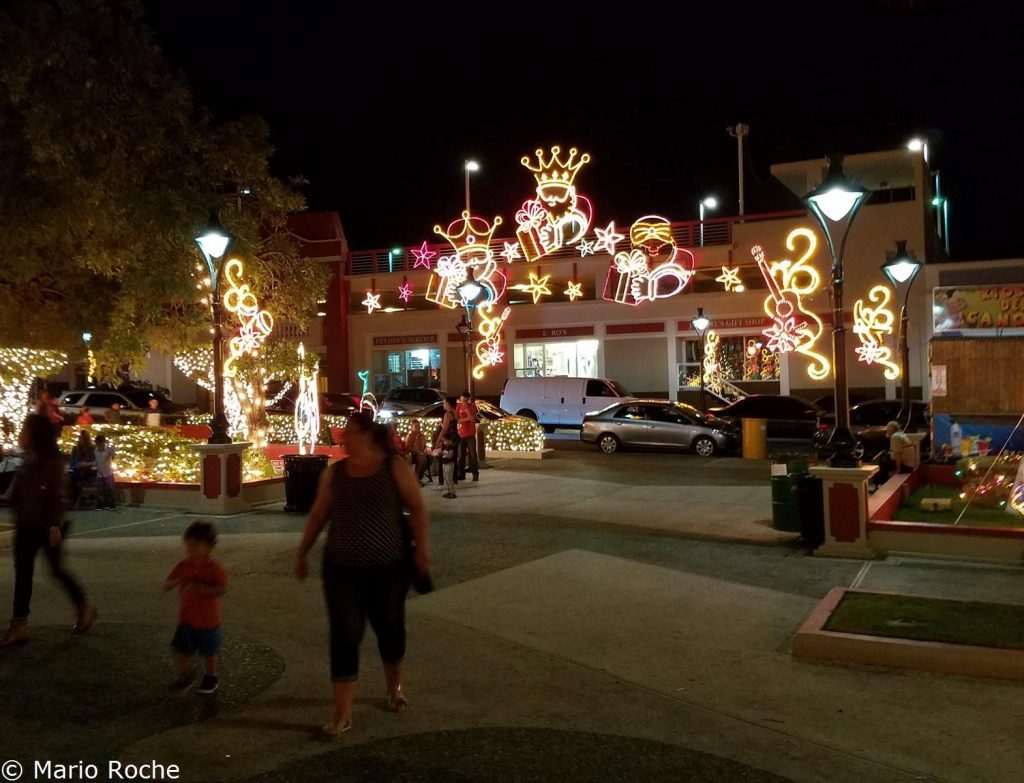 The importance of Christmas food

The Christmas menu is repeated throughout the holidays and consists of traditional roasted suckling pig, baked ham with pineapple, tarts (tamales with banana or cassava stuffed with pork or chicken), rice and pigeon peas and potato salad. Desserts such as “dulce de lechosa” (dessert made with papaya), “tembleque” or rice pudding give delight of the greediest. Revelers (Parranderos) and guests at the Christmas banquet also enjoy the “coquito” (a thick drink made with coconut and rum ) or the famous and controversial “pitorro” which is some brandy made with rum, that each house elaborates by hand with several fruits and ingredients. The homemade “pitorro” is not authorized for sale because of its high alcohol content. On December 31, the Puerto Ricans join with their families and friends to say goodbye to the year. All around the island, the roar of rockets welcoming the New Year makes deaf even the most reveler and the poor frightened pets run and hide in the most secret corners of the house. After the countdown and midnight, on the radio is broadcast “El Brindis del Bohemio” (Speech of the Bohemian), a nostalgic poem of Mexican origin that crossed borders. Although the “Octavitas” officially marks the end of Christmas in Puerto Rico, in San Juan (the capital) this feast still continues just a little bit more with the patron saint festivities of San Sebastián Street, that take place usually the weekend after the Advent ends.

by Alba Gómez Escudero as featured in Kariculture Magazine