All About Tostones - Plantain Fritters

YOU MUST TRY TOSTONES IN PUERTO RICO

When you think of Puerto Rico, your mind most likely goes straight to the gorgeous beaches with turquoise water and soft, white sand. While the beaches are certainly nothing to forget about, Puerto Rico has more to offer than just scenery. This island paradise also has some pretty delicious food. One dish you absolutely cannot leave Puerto Rico without trying is tostones. 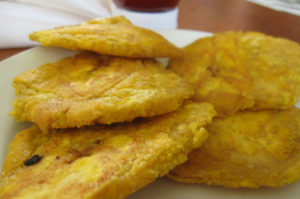 Tostones are made from a sliced green plantain. Plantains look fairly similar to a banana, but they are much larger, and greener on the outside. The taste itself is sweeter than a banana as well. The plantains can be sliced width or length-wise, though the width-wise circles are much easier to cook and eat.

First, the plantain slices are fried up in a pan full of hot oil until they have a golden color. Then, they are removed from the oil and placed on a tostonera, which is basically two wooden boards, and smashed. You don’t really need a tostonera, the same effect can be achieved with 2 cutting boards, or even a flat surface and something hard to hammer the slices with. Whatever tools are used, the result is a slightly fried plantain with some insides oozing out- but they are not ready yet. 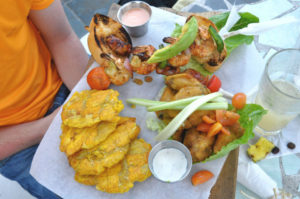 After the smashing process, the slices are tossed back into the oil. Once they become a golden brown, they can officially be called tostones. They are generally served salted, with dipping sauces. The overall favorite tostones sauce in Puerto Rico is mayoketchup, which is literally just a combination of mayonnaise and ketchup.

Tostones are served as sides, or a street-side snack all over Puerto Rico. They are a simple dish, but the crispy sweetness of tostones is most definitely something you need to try.

Would you like your Puerto Rico adventure? This co

Say what?! Our beaches are open!! It’s the best

Don’t you love Puerto Rico sunsets? We love this

A simple but beautiful creation somewhere in Luqui

Don’t you wanna just dive in the warm, clear wat

Ever taken a cruise from Puerto Rico? Did you know

Do you see yourself here, in this paradise? The so