This Travel Channel tid bit features the food kiosks in Luquillo, located right by the beach. The Luquillo beach kiosks:

Let me start with this- The single best thing I ate in PR was a plastic cup of octopus from one of the stalls here. I ate a lot (A LOT) of food in PR. I would go back just to have more of that 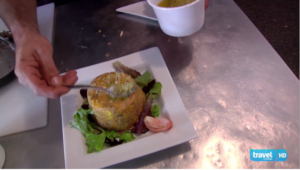 Many of the kiosks feature mofongo, a tasty puerto rican dish made from plantain, pork rinds and garlic.

octopus. Oh, and there just happens to be a pretty awesome beach out back.

The best travel tip I’ve heard for dining in a strange place is this: Look for the table having the most fun, tell the server you what they are eating/drinking (or point and smile if you don’t speak the language) and go with the flow. That’s exactly what I did at the stalls and it really paid off.

My advice for visiting the stalls is to start at one end and walk the whole length, check out each stall. Notice the crowd, the menu and what people are eating. Each stall really has its own character and specialties. Even though, the heat lamps out front all appear to have the exact same empanadas and tostones. Make a mental list of the best looking places/things, then walk back and stop and order the ones you remember.

The aforementioned octopus was actually an impulse add-on to my order. A guy (the one having the most fun) came up to the counter and ordered it while I was waiting for my order, a lobster taco and a coconut empanada. I pointed at the cup of octopus and asked the lady for one. The octopus was tender and sweet, more 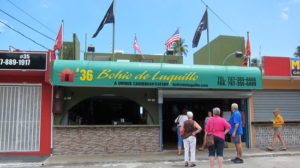 The kiosks are visited by people all over the world who want to taste the typical puerto rican dish.

like lobster than come of the chewy octopus I’ve had. It was marinated in a lime and garlic sauce. They gave me a tiny portion cup of hot sauce as well. I literally drank the sauce remaining in the bottom of the cup. It was that good.

The fried selections really are pretty similar, but some stalls are much better. Prices are all pretty good. Service is very laid-back. This is not a place to come in a hurry.

The food stalls at Luquillo were a highlight of one of the best days traveling I’ve ever had. We were in PR for a wedding and really only had one free day to explore. So, we borrowed a car, stopped by Kasalta bakery for breakfast and cafe con leche, took the (scenic) drive out from our hotel in Ocean Park, hiked in El Yunque, stopped at Luquillo stalls to eat, and lounged on Luquillo beach. I highly recommend this itinerary if your time in PR is limited, it was an incredibly great day.