The 8 Piña Coladas you need to try in its hometown: San Juan, Puerto Rico

YOU DON’T HAVE to go far to find a Piña Colada in San Juan, Puerto Rico. The cocktail’s birthplace is rife with frosty hurricane glasses full of rum, coconut cream, and pineapple juice. The bar at your hotel undoubtedly blends a reliable version, which you can happily slurp while lounging on the sunny hotel patio until you get brain freeze. But you don’t want to simply call it in when drinking Piña Coladas in Puerto Rico — because the bars on this island make some of the best vacation drinks in America.

To start, any lover of frozen beverages needs to make the pilgrimage to the bar that invented the Piña Colada — or rather, both bars that “invented” it. Narrowing down the options, it gets a little complicated. Barrachina and the Caribe Hilton have tussled for decades over credit for the drink. The Hilton claims that bartender Ramon Marrero created the drink there in 1954 though a competing story gives credit to another bartender there, Ricardo Gracia. Another theory claims that Marrero put together an ersatz version while working at Barrachina before moving to the Caribe Hilton. Or maybe it was yet another bartender at Barrachina, Ramon Portas Mingot, who was first. Lost yet?

Luckily, the long-standing feud doesn’t detract from the delicious beverages at both bars, so in the name of fairness, try both. The bars are just 20 minutes apart by car. But why stop the bar crawl there? A handful of bars around town have put their own spins on the Piña Colada that are worth checking out too. The next time you’re in PR, here are the spots you have to hit. 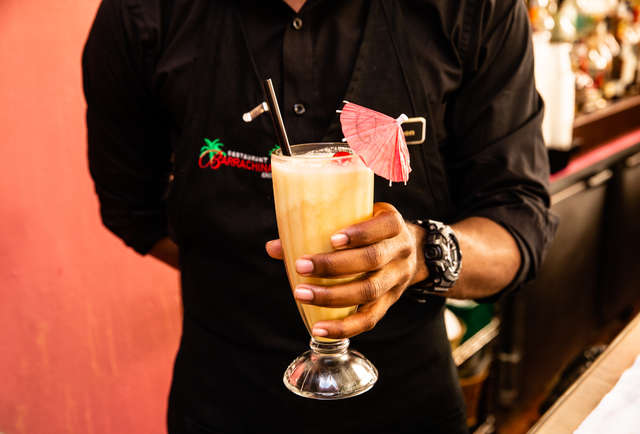 1. Barrachina – Birthplace of the Piña Colada

Start your journey round the whirring slushie machine at Barrachina. A neon sign announces the bar in the evening, but pink stone walls that flank the courtyard make it an even more delightful day-drinking spot, when a tall, frosty drink is most appropriate. Pass the time sipping your drink watching the bartender as he fills entire pitchers from a row of drink machines while hoards of tourists gobble them down just as quickly.

Thanks to @chefmendin for the much appreciated shout out to our Piña Colada on @thirsty article http://bit.ly/2D0AI14. We look forward to serving our famous cocktail when we return better than ever later this year.

Gone is the Beachcomber Bar that once lured drinkers to the hotel, so make your way to Caribar, the now de facto Colada maker on the grounds. Blenders are the preferred tool here, so expect an icier rendition of the classic cocktail that’s a bit easier to drink (and refill and drink again).

As part of Colectivo Icaro, a group of all-star cocktail bars in San Juan, Jungle Bird serves “not tiki, but Taino-tropical drinks.” Tepache, a drink made from fermented pineapple peel and rind, appears all over central America and the Caribbean, but bartenders at Jungle Bird build on the traditional low-ABV beverage to create a new take on the classic Piña Colada. In the Tepache Colada, servers combine tepache with Don Q Oro and coconut cream for a modern cocktail rooted in tradition.

The bartending industry hangout La Penúltima makes a solid rendition of PR’s hometown beverage, Yisell Muxo, director of brand advocacy for Don Q Rum, says. Bartenders from across town come for La Penúltima’s burgers and back patio but also for the elevated Piña Colada. The drink begins with a quick rinse of Amaro Montenegro, followed by Don Q, a house blend of Coco Lopez and high-fat coconut milk, pineapple juice, maraschino liqueur, and a topping of Angostura bitters and cardamom.

The Piña Colada-ish cocktail at La Central doesn’t really have a name; the bartenders simply called it ponche (punch). Foregoing coconut cream, bartenders fat-wash Don Q Cristal white rum with coconut oil. They then combine that with more rum in the form of Ron del Barrilito and more coconut in the form of coconut water, adding in house-made orgeat, lime juice, pineapple juice, spices, and bitters as well. After dry shaking to avoid over-dilution, they serve the drink over crushed ice and garnish with a pineapple wedge, grated nutmeg, and toasted coconut. Not bad for an unnamed house punch.

George Stern, head bartender of The Polynesian tiki bar in New York, doubles as beverage director of Gallo Negro, bringing serious tropical-cocktail muscle to the PR bar. For his Piña Colada, Stern prefers to split his rum base three ways, incorporating white rum, dark rum, and overproof. He shakes the spirits with Coco Lopez alongside coconut milk, as well as heavy cream made in house. Pineapple juice and lime juice round out the recipe, putting the total ingredient count at eight. That may seem excessive compared to the traditional three ingredients — until you taste the perfectly layered concoction and suddenly forget all basic versions that came before it.

A favorite of Sailor Jerry brand ambassador Anthony Bohlinger, the appropriately named La Casita de Rones is unsurprisingly home to a solid Piña Colada. You may be surprised, though, to find the waterfront watering hole serves not one but three versions, from a classic to a hand-shaken version with coconut water and cane syrup to something called a “Sexy Colada” with ginger and a pinch of sea salt to zest up the drink a bit. But perhaps the bar’s greatest selling point is the view. You can get a perfectly balanced Colada served over crushed ice with a side of gentle surf and Caribbean sunshine. If that’s not #vacationgoals, we don’t know what is.

Thank you Matador Network for allowing us to use your very informative article.

The 8 Piña Coladas you need to try in its hometown: San Juan, Puerto Rico

Best things to See Eat Do in San Juan

Raise your hand is you are in need of turquoise cr

Find your secret paradise in Puerto Rico and stay

SUP or standup paddle boarding is one of the most

It was great having you! Please come back and shar

Just steps from our hotel is this fabulous walkway

Happy Fourth of July! Celebrate the peace and comm

Our lowest priced room is our Twin Room featuring

Did you know that the lagoon has a beach area? It'