1 At the Raíces Fountain 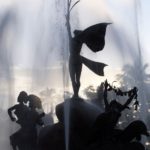 I remember the first time I walked down Paseo La Princesa, the broad promenade that hugs the ancient city walls as it snakes around what was once the boundary of Old San Juan. The tree-lined street, lined with food vendors and local artisans, was serene, quiet and lovely. And in the distance was a large fountain at the end of the paseo, overlooking the bay.

The fountain is called Raíces, or Roots, and it represents the diverse ethnic groups (native Taíno, Spanish and African) that make up modern Puerto Rico. And as day turns to night, it transforms into one of the most romantic spots in San Juan. Framed against the setting sun, it’s a beautiful spot, ideal for a proposal. Don’t hesitate in getting engaged in Puerto Rico 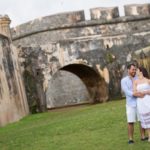 You actually have several candidates if you want to propose within the walls of an ancient fortress. And by the way, if that sounds about as romantic as proposing in front of a prison, that’s because you haven’t seen these fortresses!

Castillo San Cristóbal and El Morro are historic monuments with panoramic views and several breathtaking spots to choose from. My recommendation would be in front of a garita, or sentry box. These little towers just out from the corners of the ramparts, offering a bit of seclusion as well as a truly iconic backdrop.

The lone drawback is that you’ll be proposing during the day, and if that strong Caribbean sun is out, you’ll want to be dressed casually. 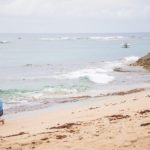 This one was so easy that I thought I’d try to narrow it down; after all, Puerto Rico has about 300 beaches to choose from. But I’m guessing that, if you want to propose, you’ll also want a bit of privacy. So how about a beach that you can practically claim as your own (if you’re lucky)?

That still leaves a huge number of places to choose from, but I’m going to force myself to narrow the list to three: 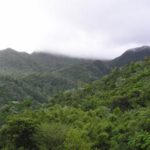 Puerto Rico’s gentle rainforest has waterfalls, scenic overlooks, its very own mythology and the soundtrack of the coquí to serenade you as you find the perfect trail, and the perfect place, to propose. Personally, I would take the Mount Britton Trail to reach the peak and enjoy its unparalleled views. Need more reasons to get engaged in Puerto Rico? 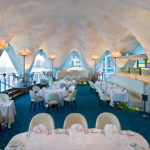 Again, your choices here are numerous and range from rustic eateries to chic dining establishments helmed by superstar chefs. And again, I had to struggle to narrow my suggestions down. This is a personal bias, but I wanted to avoid hotel restaurants; I also looked for local cuisine, because, after all, you’re in Puerto Rico. And I came up with Casa Lola. Not only did I love the food here (courtesy of Chef Roberto Treviño), but I also loved the historic mansion that once belonged to Lola Milagros Cedeño. This Puerto Rican fine dining establishment is all intimate nooks and niches, with private rooms, intimate corners and even a private cellar that you can reserve for a very special dinner. Another beautiful and romantic retaurant is La Perla Restaurant at La Concha Resort Hotel.

Throughout this crisis, we would like to thank the

Nature is enjoying our quarantine. Manatees are re

Through these uncertain times we continue to provi

Early morning swim, getting ready for Sunday’s I

We predict these brand new giant chairs located in

Old San Juan is the home of the thinnest house in

Puerto Rico is not only about beautiful beaches, i

We all dream in colors borrowed from the sea. ....